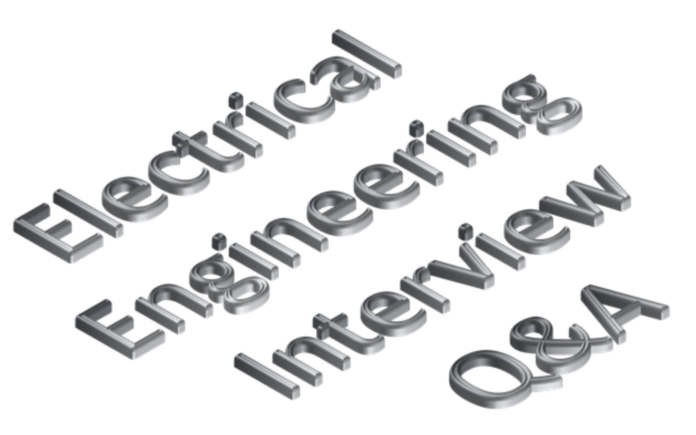 Here, I am listing down few basic electrical engineering interview questions with their answers. You can have quick brush up at the time of interview.

Voltage is the force that moves free electron from one atom to another atom.

Current is movement of free electrons in an electrical circuit.

Resistance is a measure of the restriction to current flow in an electric circuit.

An ability of a component to store an electric charge known as capacitance.

AC circuits can have capacitors, inductors or even both. The opposition of current flow by capacitive and inductive components is reactance.

Consider an AC circuits having resistive loads, inductive loads, and capacitive loads. The total opposition to flow of current in a circuit is impedance.

Why the secondary of CT should always be shorted?

The secondary of CT is connected across ammeter, so circuit is closed. Ammeter has least resistance, so voltage across secondary terminal is almost zero.

Suppose the secondary of CT is open. The relation between voltage and number of turns in case of transformer is as shown in below equation.

Since N2 / N1 is very large, very high voltage induces in the secondary. This may puncture the insulation of CT core or winding. Hence, CT secondary should be shorted in case ammeter needs to be removed.

Why transformers are always in kVA rating and not in kW?

The reason is that the copper loss (I2R) of a transformer depends on current and iron loss or core loss on voltage. Therefore, total transformer loss depends on VA (volt-ampere). Hence, ratings of transformers is in kVA.

Another reason is transformer is a static device. Means, it does not consume power. It transfers power from primary to secondary. The manufacturer does not know which kind of load is connected to transformer. In case of inductive loads, current lags behind the voltage by 90 degrees and in case of capacitive loads current leads the voltage by 90 degrees. Power factor remains unknown. Hence, kW rating cannot be mentioned.

Why motor ratings are in kW and not in kVA like transformer even though working principle is same?

Motor is a dynamic device. It consumes power unlike transformer. Motor converts electrical energy into mechanical work. It is an inductive load and hence, power factor can be known. Hence, the motors rating is in kW and not in kVA like transformers.

What do we check in motor with the help of megger?

What is the difference between transformer and motor?

In case of step up or step down transformer, which electrical parameter remains constant?

What is a recloser, where we can use and why?

Recloser is a device, which detect over current conditions, interrupt the circuit to clear temporary faults, and then automatically re closes to re-energize the line.

They are mostly used in transmission lines. Distribution system can be prevented from being left out of service in case of temporary faults.

What is sectionalizer and where we can use it?

A sectionalizer senses the current equal to or greater than a predetermined magnitude and automatically opens the circuit.

What is a switchgear?

A switchgear is a device, which can make, carry and break the electric current in the circuits under normal and abnormal conditions.