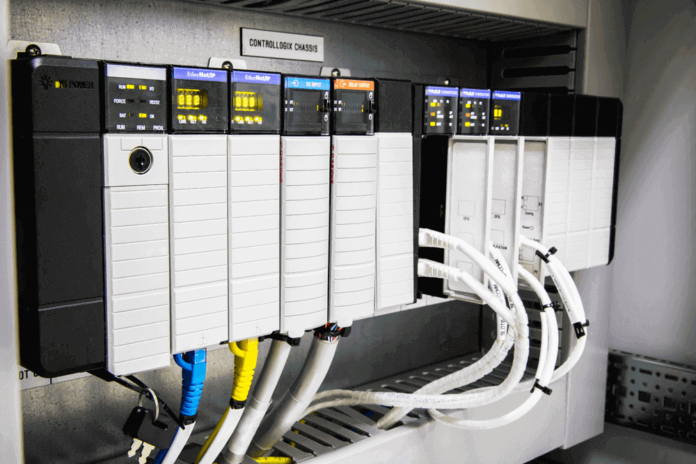 If you are associated with Industrial Automation, then you might have heard about PLCs – right?

In this article, I would explain to you that.

Let me mention first the definition as given by NEMA.

According to NEMA Standard, PLC is –

“A digitally operating electronic apparatus which uses a programming memory for the internal storage of instructions for implementing specific functions such as logic, sequencing, timing, counting and arithmetic to control through digital or analogue modules, various types of machines or process.”

Let us understand it.

The reason is, PLCs have electronics cards inside. There is no moving part. It is completely a static device. Although it can control the whole process plant. See the image below.

You can program the PLC with help of a computer as per process requirements. 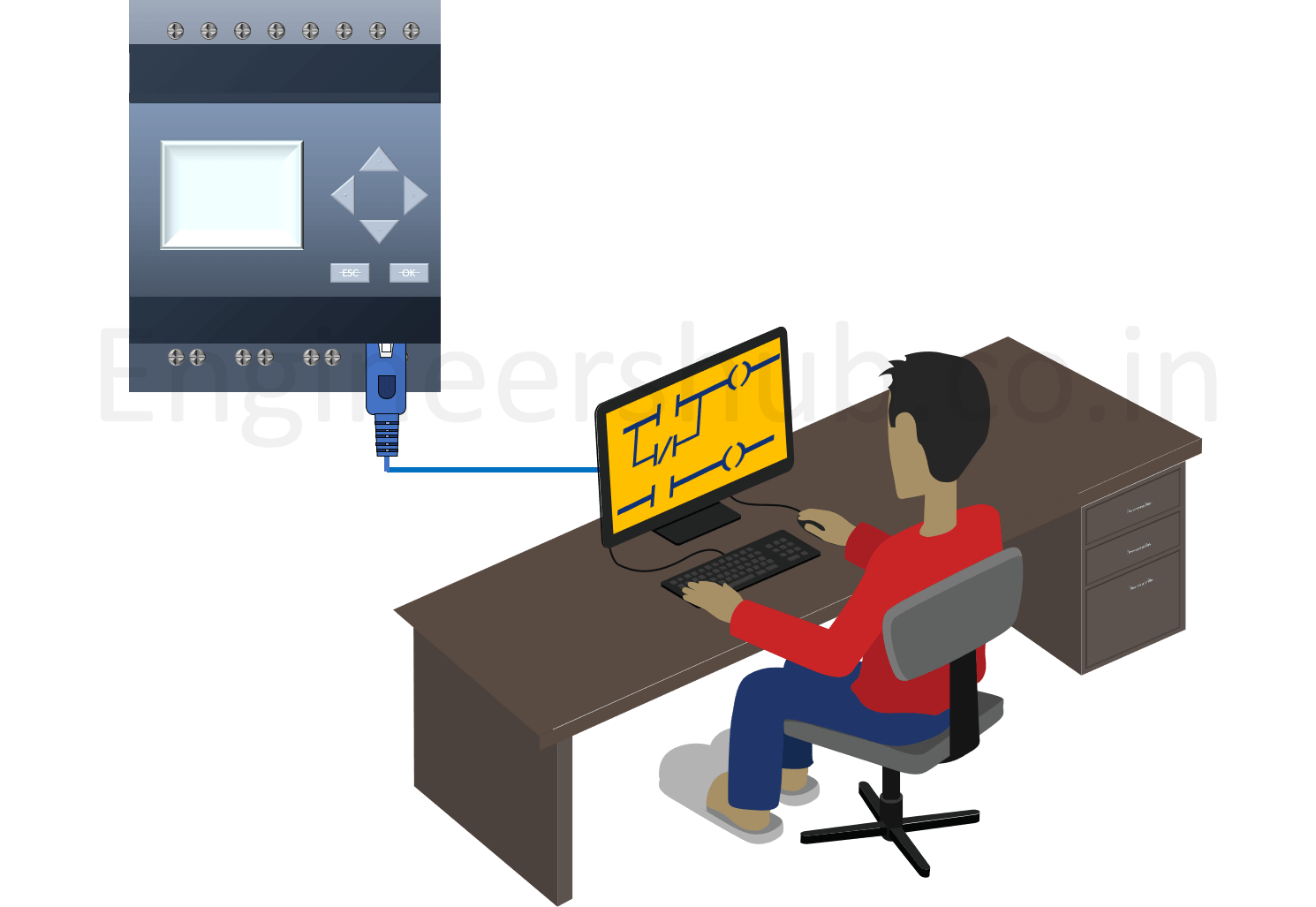 PLCs allows user to store the program into its memory. Once the user stores the program in its memory – all done. The PLC will keep doing its job as per the stored program. 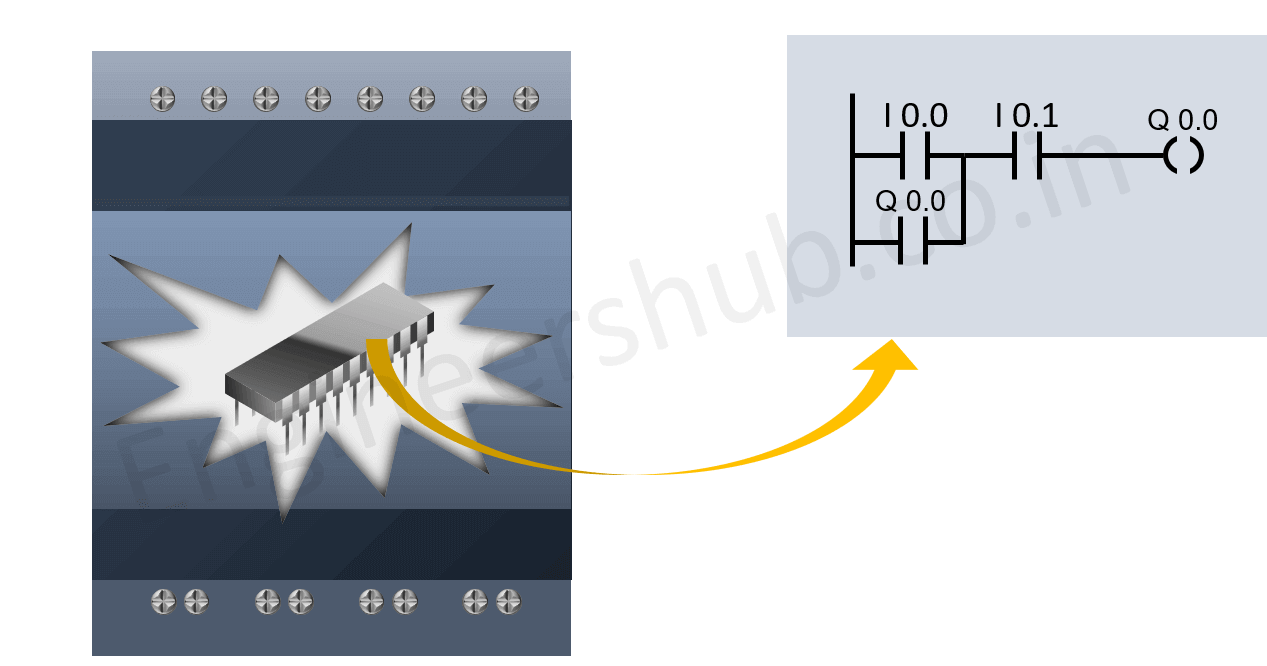 Furthermore, PLCs have inbuilt arithmetic functions with the help of which you can do addition, division, subtraction, multiplication, changing real numbers into an integer, and a lot more.

It also has timer and counter functions. This means you don’t need to physically buy and install timers and counters inside the control panel. PLCs themselves can perform such operations.

Let’s say, you want to turn off a motor after 20 seconds. Use the OFF-delay timer function of PLC, you would get the same result. Take a look at the image below. 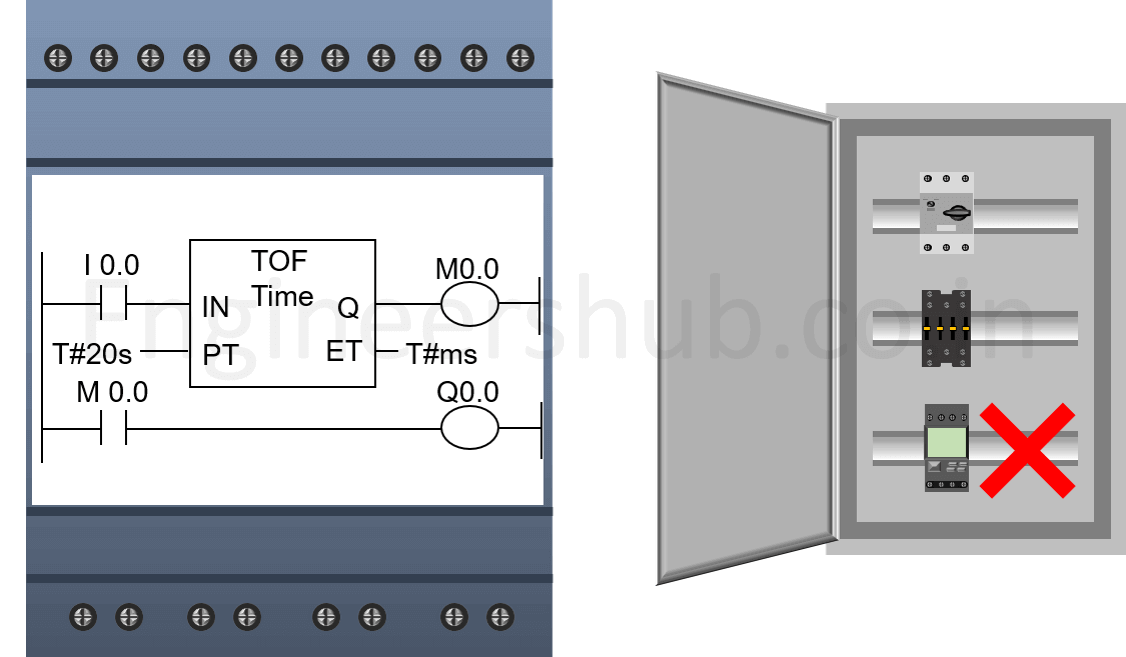 Digital I/O modules of PLCs allow you to connect digital devices and for analog devices, you have analog I/O modules.

The PLC controls various machines, process plants through these modules.

So, now you may have understood that those technical words used by NEMA in defining the PLCs are completely justifiable.

No need to remember the definition. Just understand it.

Let’s discuss the next interesting point. Why the name – Programmable Logic Controller?

Why the name – Programmable Logic Controller?

‘Programmable’ means – you can program the PLC with the help of PLC programming languages.

IEC 61131-3 standard mentions five different methods to program the PLC. Programming is where the magic happens.

Ladder programming is one of them.

Note that you can program the PLC many times. Modern PLCs allow you to change the program in running process plants as well. That’s the beauty of PLCs.

The word ‘Logic’ is used because PLCs can perform logical operations. In PLC, you can make AND logic, OR logic, NAND logic, etc. with help of Ladder Logic (a commonly used programming language in PLC) as shown in the below image. 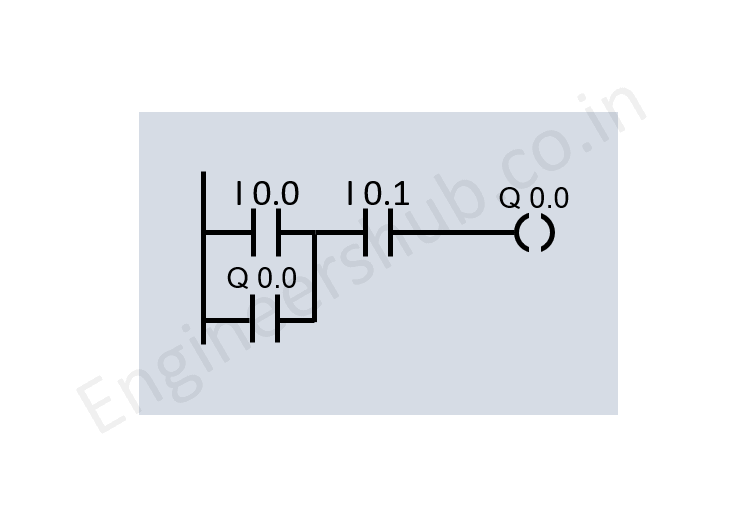 However, this is just a simple example I am giving. You can make complex Ladder Logic programs in PLCs as well.

The PLC ‘Controller’ mainly has two sections. One is the Central Processing Unit and another one is memory. 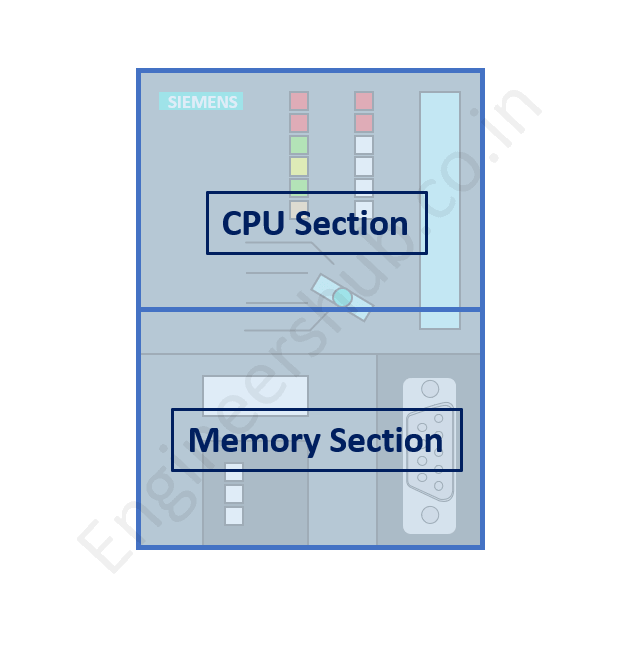 As mentioned earlier in this article, the memory is used to store the program and the firmware.

The job of the CPU is to recognize the input received through input modules, processing the logic made and executing the output.

In this way, the PLC controls the whole plant.

I hope that you have understood – what the plc is.

Do you think that PLC is a computer?

No, it is not the computer but the architecture of PLC is the same as the personal computer.

The difference is that PLCs can work in an industrial environment. They have special input/output interfaces and control programming languages.

Today’s PLC has various math and logic functions. PLCs are the first choice in process industries. They are getting smaller in size with faster CPUs.

How to measure a 4-20mA current loop?